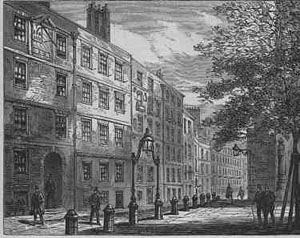 Our set of Chambers was established in 1954 when Alan King-Hamilton moved his set to Lamb Building from 4 Temple Gardens, which was due to be demolished to make way for the new Middle Temple Library. At this time Lamb Building itself had just been rebuilt following it’s complete destruction in the Second World War.

In 1964 Alan King-Hamilton was appointed a judge at the Old Bailey and Chambers merged with the Chambers of Stanislaus Seuffert a highly successful family silk from Goldsmith’s Buildings under his headship. In 1975, after 50 years at the Bar, he retired and Leonard Krikler took over as head of chambers until his appointment as a Circuit Judge in 1984. Kenneth Wheeler was then head of chambers until 1996 when Ami Feder took over. Bernard Richmond QC then took the position from October 2013. The senior clerks over this period have been Maurice Berry, Stanley Mott, Martin Secrett, and currently Gary Goodger.

The Lamb of God

Over the doorway to Lamb Building there is a carved model of a lamb with staff. The lamb with halo and staff as religious symbol is know as “Agnus Dei” or Lamb of God. It is the adopted emblem of the Middle Temple and can be seen in many places around the Inn, including the 17th Century screen carrying the organ loft in Temple Church. There is a theory that the holy lamb was chosen as the emblem because it had originally been used by the Knights Templar whose arms were two knights mounted on one horse with a trotting Agnus Dei.

We believe that the lamb above our doorway also dates back to the 17th Century. Historical accounts of the building describe a lamb and flag “carved in wood and always kept well gilded”. Although the building was completely destroyed by bombing in 1941, it is clear from photographs taken in the aftermath that the lamb itself survived intact. Until 1988 the lamb also had a halo but this came away sometime between 1988 and 1995.

The history of the building 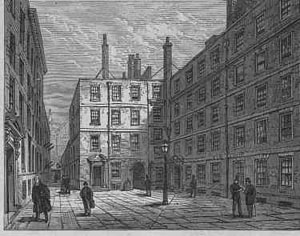 The present day Lamb Building was built in 1954 as part of the reconstruction of the Middle Temple following its bombing during the Second World War. It is believed that our building and Pump Court stand on the site of the hall built by the Knights Templars back in the 12th century. The first building to be constructed on this site was converted into chambers in the late 16th century and was then pulled down and rebuilt in about 1639 with the new building being called Elm Court Building.

In 1678 a devastating fire destroyed several chambers from Vine Court (Cloisters) in the East to Middle Temple lane in the West, and from Fleet Street gate in the North to Middle Temple Hall in the South. Temple Church and Middle Temple Hall were saved by the use of explosives to destroy buildings including Elm Court Building in order to create a fire-break.

Elm Court Building was not completely destroyed however in 1879 it had to be demolished and rebuilt due to its poor condition.
The 1879 building survived until the Second World War when it was destroyed by bombs. It was rebuilt between 1952 and 1954 when it was renamed Lamb Building. The original Lamb Building was located in Lamb Court just to the South East of Temple Church in Lamb Court (known also as Cloisters Court) however bombs destroyed this in 1941. This building stood on the original burial ground of the Knights Templar and had been rebuilt after the Great Fire of 1666. There is a ground plaque showing the original position of this building.