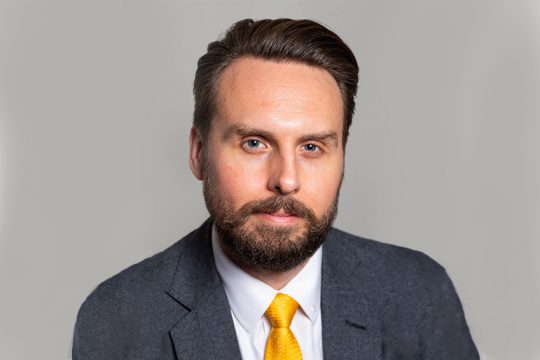 Ross Talbott is recognised as one of the leading barristers in the South-East and is regularly instructed in the most serious cases to come before the courts. He is an expert in cases involving recent and non-recent serious sexual allegations and those involving the sexual, physical and emotional abuse of children and vulnerable adults.

Ross accepts instructions in both the Criminal and the Family Courts, applying his expertise across both jurisdictions in cases of the utmost severity.

Ross sits as a Recorder and is authorised to sit in both the Family Court (public and private law) and the Crown Court.

Ross is regularly instructed as Leading Counsel in cases in which the instruction of two advocates is authorised.

Ross is appointed to the CPS Advocate Panel at level four (the highest level) and the CPS Rape and Serious Sexual Offences panel.

Both Chambers UK Bar 2022 and The Legal 500 2022 rank Ross as a Leading Junior, describing him over the many years he has been ranked in the following terms:

“A first-rate advocate with a very compelling and persuasive manner in court. He builds excellent rapport with judges and juries. It is clear that he prepares his cases extremely thoroughly and knows his papers inside out.”

“He has a calm and thoughtful manner about him which the juries like, and an effective approach. He will always find a sensible solution to the problem.” “He is approachable, thorough, prompt in dealing with advice work and very strong on the law.”

“Ross Talbott specialises in prosecuting and defending in relation to serious sexual offences including child sexual abuse cases, as well as other matters. Both prosecuting and defending, he is praised for ‘controlling and dealing with some of the most difficult and demanding defence counsel in London‘ and ‘providing a first-class service to the instructing solicitors and defendants he represents‘.”

“Bright and hardworking, he has excellent judgement and is a pleasure to work with.”

“A well-regarded junior who prosecutes and defends serious sexual offences and organised crime cases. He is regularly instructed in complex criminal matters such as current and historic sexual assault allegations.”

“He is bright, very hard-working and great with clients.”

“”He is very meticulous, very easy to deal with and shows exceptional judgement.”

“He is a great tactician in jury trials.”

In the Criminal courts, Ross is regarded as an expert in cases involving allegations of serious sexual offending and the sexual or physical abuse of children.

Ross is instructed in cases across the country for both the Prosecution and Defence in cases involving both recent and non-recent allegations of child sexual abuse, rape, cruelty and offences involving the death or serious injury of children or vulnerable adults.

Ross has vast experience in cases of this nature and is regularly instructed to advise at the early stages of an investigation for both the Prosecution and Defence.

Ross accepts instructions in family cases involving allegations of non-accidental injury and / or the sexual or physical abuse of children.

Ross’s expertise in criminal cases involving allegations of this sort is invaluable when precise, incisive, and robust cross-examination of expert witnesses, alleged perpetrators, complainants or other professionals is required during Fact-Findings or Final Hearings.

Ross’s expertise in cases of child sexual abuse, child abuse, neglect and rape allegations within the criminal jurisdiction ensures that he is able to offer detailed advice to his instructing solicitors and lay clients at every stage of family law cases in which serious allegations are made.

Ross is able to represent parents facing allegations in both the Family and Criminal proceedings, ensuring continuity of counsel in the most serious and stressful of cases for parents.

R v IB [2021] – Defending father against allegations of rape, sexual abuse, assault and child cruelty against his three daughters between the ages of five and ten

R v SP [2020] – Defending a man charged with the kidnap, false imprisonment and sexual assault of a child picked up from the side of the road